I have begun a journey and will post my thoughts here.  I suspect it will be more cathartic for me and may or may not be of interest to you.  I am certain that I am at the start of a dozen of the most interesting days of my life; and I have had a very interesting life already! 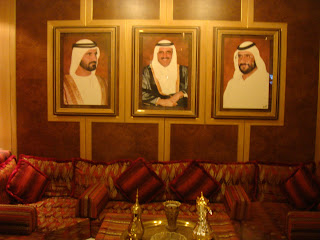 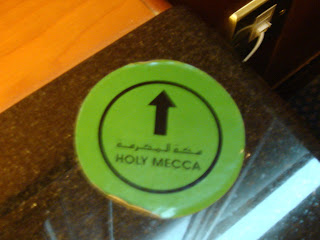 Seattle to DC … DC to Dubai.  I admit to flying in the front and sleeping well.  Dubai hotel has exceeded my expectations including a Mecca directional finder right next to my bed.  Swam and relaxed, spoiled – I suspect things will change a bit in a few hours when I fly to Kabul.

Old Afghan trip story # 1.  I had been in Mashad in Eastern Iran – It is one of the holiest cities for Muslims in the world and the second largest and the holiest city in Iran.  I had traveled across Iran, but Mashad on Muhammad’s birthday was an experience.  My Persian friends dressed me appropriately and took me to the grand Mosque with the instruction that if anyone talked to me, I was to walk away quickly.  After the holiday, I left Mashad for the Afghani border.  The border was in a remote area with a wide no man’s land between them.  The Iranian side was fairly modern with the best propaganda photo I had ever seen; it was the Shah, dressed in a business suit but looking regal with the earth superimposed below him.  He seemed to be bigger than life, bigger than the world. 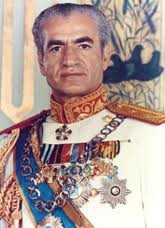 After clearing Iranian customs, such as they were, we were told that there was a bus to take us the mile or so to the Afghan side.  Great, but the price though less than a kebab in Seattle now, seemed arbitrary and I refused to pay saying I could walk.  Several others joined me and began the bus started following us with an ongoing negotiation.  We eventually boarded and I had found a friend; Brian, a Canadian, but not covered in maple leafs, also traveling by himself to the East.

On arrival at the mud hut on the Afghan side, we found disheveled but uniformed guards. Upon closer inspection, it was clear that the uniforms were WWII vintage US Air force uniforms with the insignias removed.  Welcome to Afghanistan circa 1974.   I was asked for my immunization papers which I am certain was only a request for baksheesh since the literacy of the guards was in synch with their uniforms.  My new friend Brian unfortunately had no immunization documents so had to go to the clinic, to which I accompanied him.  He was to get a shot and I had to force the question to get basic sterilization for the needle.  I traveled with Brian to Herat (where he was a pied piper since he had a flute and hundreds of kids would follow us as we sang, danced and he flauted.)  He was still healthy a week or two later so the inoculation was innocuous.  I can’t imagine that tomorrow’s re-entry to Afghanistan will be any weirder than my first.

Only in Dubai… Maybachs at Duty Free! 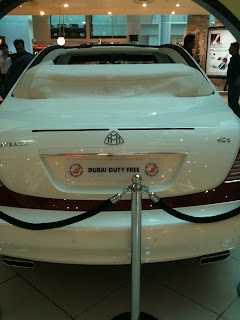 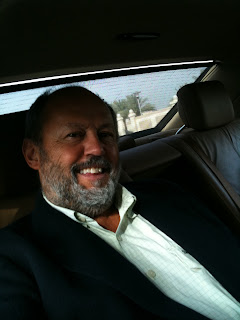 ‘You’re in luck, Mr. Brotherton’, the Safi Airways (The International Airlines of Afghanistan) agent declared on check-in.  ‘Today we are using our really big aircraft.  Usually the plane is much smaller.’  Why I didn’t feel as lucky as he encouraged me to, I don’t know.  Another on-time departure, leaving the gate 45 minutes late, to wait on the tarmac for 45 more.  Leaving Dubai during the day was a treat in that it afforded me the opportunity to see this amazing place from the air.  It is literally a city crawling out into the sea, a la Amsterdam or Venice, without the old world charm but with better weather.  I look forward to returning to swim in the gulf and marvel at the architecture. 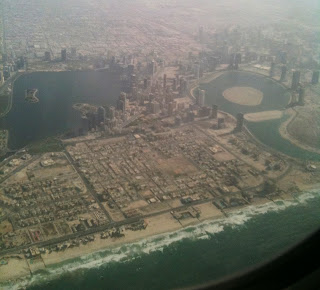 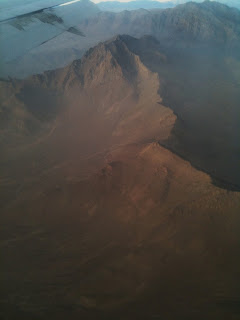 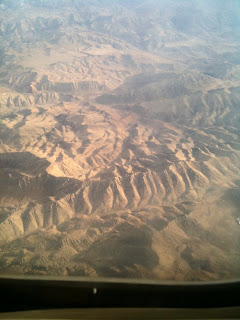 I am really amazed at the terrain from Dubai heading north.  This is a part of the world I have never been.  The massive unoccupied desert all the way to the sea puzzles me.  Why no resorts?   Having flown over endless foreboding Alaskan mountains dozens of times, I can reluctantly admit that I always reflect on what it would be like to end up down there (i.e., “in case of a mountain landing,…”).  I think I would prefer the getting dumped in the Brooks Range to the Hindu Kush. These mountains that seem to be sand dunes, devoid of any vegetation go on forever. I am pleased to have just gotten a ticket to fly to Mazar I Sharif tomorrow..  I last traveled that route by road but that is no longer practical.  I will learn my lesson and study the map before getting on the plane. 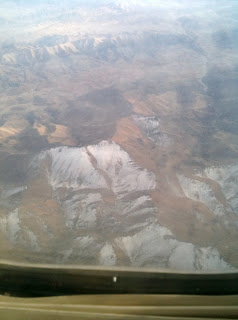 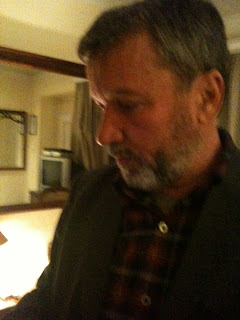 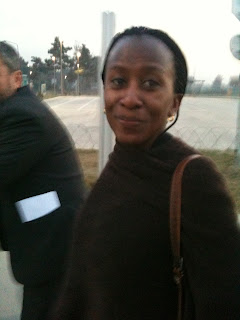 As we approach Kabul by air, it seems to be protected by the mountains around it.  Customs was easy.  I was pleased to have been advised to find the table (unmarked) in the baggage area and to have two identical passport photos with me.  I was issued a foreigner’s registration card in addition to the visa already in my passport.  It is apparently a big hassle if you fail to complete this step.  Leaving customs was similar to many third world countries although less frenetic than some.  I was to meet someone who said he would put JOE on a sign although he would not be allowed to leave the parking area so I would need to walk there outside of the secured airport area.  In fact, Mr. Quaderi was there in the airport and found me.  As we walked to the parking area, he introduced me to a woman from Uganda who works in logistics at the UN office where Mr. Q has his day job.  It was great to tell her of our visits and our interest in her country, especially that my wife had just visited two weeks ago.

Driving into Kabul it became clear that things have changed.  Near the airport, many people had guns, some had uniforms and some were “undercover” (or as undercover as you can be with an ak-47).   The streets were clogged with traffic and the driving was comparable to other places in Asia.  I was to be deposited at the Gandamack, a classic guesthouse favored by ex-pats and journalists from around the world.  They must not get much walk-in business because there was no signage, only a guard and a door in the wall.  After some discussion, our car was allowed in to an area with another armed guard and people to inspect it.  Ultimately I took my bag and walked in.  The place is rustic but nice enough and more interesting than many.  As a Flashman fan it was great to see that Harry is revered here.  (If you haven’t read the Flashman books, I recommend them.)  The owner has collected some interesting armaments that are on display throughout. 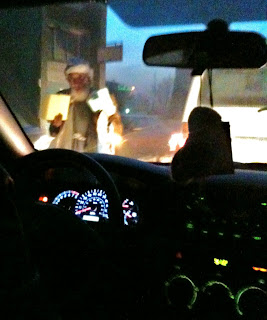 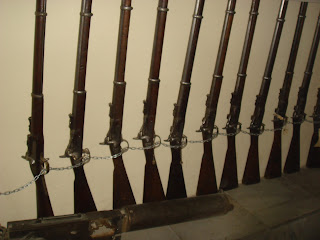 As I settled into to room #9, there was a knock and my friend (and a student of mine last year at the UW law school), Hussein Ali Atefi was there.  It was great to see him on his home turf.  He agreed to accompany me in the morning to Mazar i Sharif but went home to sleep as he was ill.  Before he left, Mark Hough with whom I served on the UW Law School Foundation, knocked.  It was also great to see him and he indicated that he would be in the Flashman Bar and I was invited to join him and his guest.  Mark is working with US AID there.  Suzanne Griffin who was a fellow Villa parent 35 years ago also arrived and joined us.  She has been working here for a number of years.  Her husband Mike (who was also a friend from the old days and who is now sadly, deceased) was in Afghanistan with the Peace Corps when I was last here.  Suzanne is raising money to build a school in his honor.  I headed for bed as I needed to depart for the airport at 5 for a 7am flight to Mazar I Sharif.

4:30am came too soon but the water was hot for a shower.  I was out the door on schedule, bags in hand.  It was pitch black which is the only excuse I have for walking off two foot drop thinking it was flat.  Dirty and bruised I got up and determined that I was still good to go, albeit with a very tender knee.  There was no one at the desk which is my excuse for the e-mail which came a day or two later saying you haven’t paid your bill. 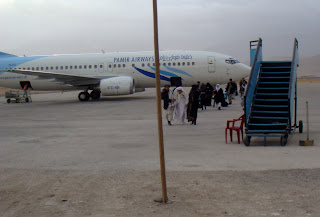 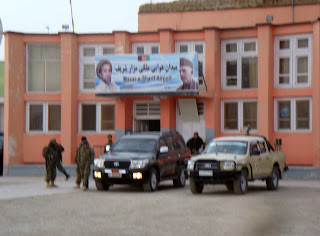 I had to pick up Mr. Atefi which proved a little more challenging in the dark.  He lives near the airport and we found him and headed for the security gauntlet that is part of flying in Afghanistan.  We were now bound for Mazar I Sharif.  The flight was great on a Pamir Air Boeing 737 and the plane conveniently dropped us off right at baggage claim, which was basically outside next to the plane.  There is a long walk through and past several security stations and checkpoints to where we found our car.  We went to the unnamed Guesthouse which is trying hard.  It has a doorman both outside and inside the door, both armed.  There I met Patty who is teaching ESL to the Law Faculty who managed my schedule for Mazar. 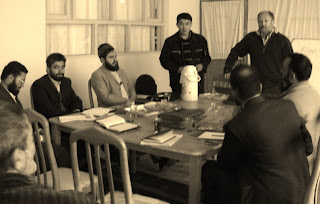 I first addressed the Sharia law faculty which went well.  After giving my prepared remarks about the importance of the law to facilitate orderly development and investment in Afghanistan, I presented three analogies between my prison teaching and what I thought Afghanistan needs.  Finally we extended the time and I spoke (and listened) about Law and Religion.  It was very enlightening and led to some lively questions and, as is typical on discussions of religion, few answers.

Later that day I addressed the Law and Political Science faculty, including a professor who had been among the top legal scholars in Afghanistan who Maureen and I were pleased to welcome for dinner at our home in Seattle two years ago (pictured below). 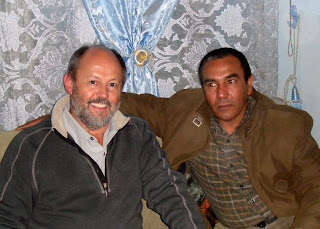 They were so kind to host me for a dinner of some traditional Northern Afghani dishes at a restaurant near the University.  I thoroughly enjoyed the dinner, which I made it through, notwithstanding the fact that I had slept only about 8 of the preceding 48 hours.  Back home I slept like a baby, even on a thin mattress with a plywood boxsprings.

Side note – One of my favorite things about the “memory lane” aspect of being  back in Afghanistan is that, it was apparently here that I learned to put my hand on your heart as a sign of friendship.  I have done it for 35 years but I didn’t remember where I had picked up the habit. 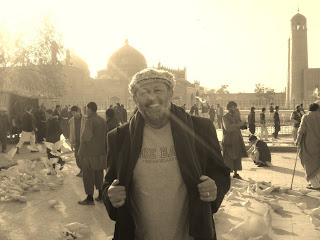 Thursday was the festival of Ashura which is a remembrance of the martyrdom of Husayn ibn Ali, the grandson of the prophet Muhammad at the Battle of Karbala on 10th of Muharram in the year 61 AH.  It meant things were shut down but the shrine was very active.  I walked through crowds with Hussein who warned me about pickpockets who come out whenever there are more people than space.  I was more concerned about someone realizing that even Christians think I am an infidel.  It was interesting and not too nerve-wracking.  I didn’t feed the birds but enjoyed everyone who did 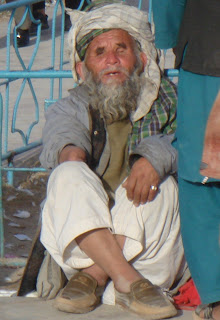 I love the irony of the hands shaking in peace with the guys with guns right below. 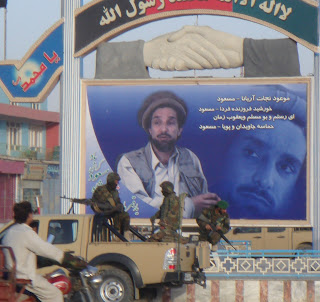 There are daily reminders of how lucky we are on our worst day:

From Mazar to Kabul

I get nervous about a leader who puts his super-sized photo everywhere.  I recall seeing photos like the one of Karzai below, but they were of the Shah in Iran in 1975.  He didn’t last much longer. 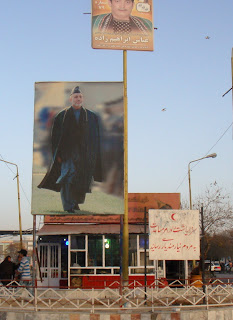